Lets talk about two scenarios here.
1.       Consider that you have a physical system which has an OS crash recently. If the system is so critical, you need to restore it as soon as possible to control the business impact. How do you do that?
What we usually do is that, we will install a new OS, make necessary configuration in the system and application side and restore the data. This will take hell lot of time and our business cannot wait till that much time. What is an alternative option to it to reduce the downtime?
2.       You have a physical system and you need to migrate the OS to another system or create an exact replica of that system. How do you do that?
Same solution as what we discussed above? Is it going to take too much time to get it done?
What I suggest is, ReaR (Relax and Recover) . You can restore the exact configuration (replica) of a system from its previous backup.

Let’s see how it is going to work here.
In this demonstration, We are going to use two systems with different configuration in terms of hard disks capacity and number of network interfaces. I am going to take a back of one system with 10GB root disk and restore it to an 8GB root disk. Since this is a demo, I used two VMs instead of physical systems. I have experience in restoring and migrating physical systems with Rear, so I am pretty sure that the demo in VMs would work exactly like how it works in physical systems.

Now I am going to install the necessary packages in the source system or the system which to be backed up. The packages are
1.       rear – Relax and Recover package, the base utility package for this solution.
2.       syslinux – To create bootable media for recovery.
3.       genisoimage -  as name indicated, to create ISO images.

These packages are available in AppStream  and BaseOS  repositories of CentOS/RHEL 8 systems. For other version of OS, you may need to download them from the external repositories.

The packages are installed now. We need to configure the backup now. The main configuration file for Rear is “/etc/rear/local.conf”. You can refer “/usr/share/rear/conf/default.conf” to get the default configuration of ReaR.

Before we start configuring the ReaR, let me tell you that, I am going to take the backup in to an NFS share. I have an NFS server in my environment which is called as “nfsserver” with a shared directory “/data/nfs_share”. The backup will be taken to that share in this demo.

Edit the file /etc/rear/local.conf and add the below details in it.

In case of Physical disks where you use UEFI partitions, you may need to add below entries as well in the configuration. 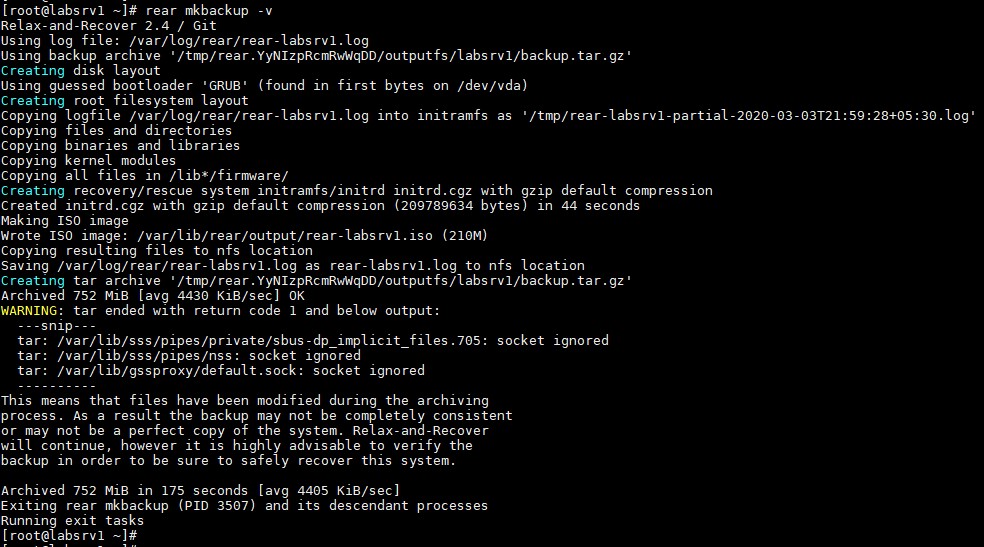 The backup has been completed now. The WARNING messages can be ignored as it is related to some open sockets which is expected as per this configuration. If we go to the NFS share, then we can see the backup files taken now.

There are two main files containing the backup and bootable media. The file “backup.tar.gz” contains the actual data backup and the file “rear-labsrv1.iso” is the bootable media used for the restoration. When we restore the system, we start booting it from the ISO image. The content of image will locate the backup and start restoring the system from there.

To schedule the regular backup, put the commands in a script, make it executable and schedule it in crontab like below.

Now we are going to test the recovery of this system from this backup. We are going to restore it to an entirely different system with less capacity of root disk to see if the features AUTORESIZE_PARTITIONS &
AUTOSHRINK_DISK_SIZE_LIMIT_PERCENTAGE are working fine as expected.

While booting the system, you will get the below options. Select the first one and press Enter key to start recovering the system. 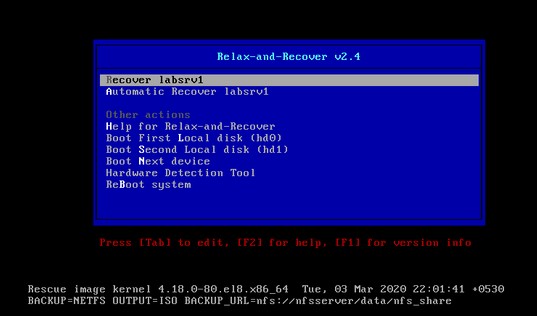 The system started booting used the below kernel now.

I selected interface 2 and pressed the Enter key as shown below. 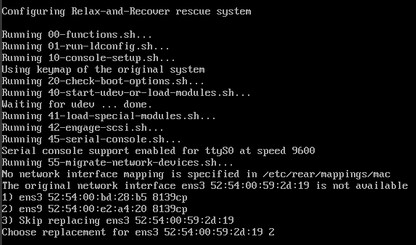 Now the system is configured with the IP address same as in the source system and prompted for login. Give “root” as the user and press Enter Key. This will not prompt for root password and will lead directly to the shell.

Limited commands will work here in this recovery shell. To see the IP configuration, use the “ifconfig” command. 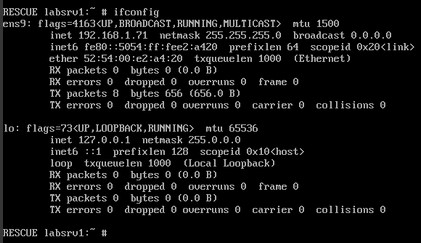 Since my source system is still up and running, I made the interface down on the recovery system to control the IP conflict issues.

I am going to assign a new IP to this system before we start the recovery. 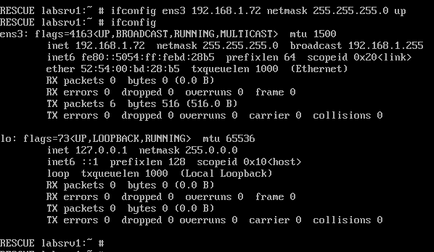 Since our backup is taken to NFS, the system will look at the backup file (xxx.tar.gz) in the same location. So, the network configuration to be setup before start recovering the system.

To start recovering the system, issue the below command:

In my destination server, I am trying to restore the OS from a 20GB root disk to 10GB one. In the source system /dev/vda is the root disk and the recovery is asking to select the destination disk. We are going to select 3 (/dev/sdc – 6GB) and press Enter key.

In the source system we have another disk /dev/vdb for /data mount point. The recovery is asking to select the destination for it. Selected option 2 which is /dev/sdb.

Now it is showing the mapping which we selected. Left side one indicates the source and the right one for destination. Like wise there are two disks we have selected for the restoration. Selecting the default option to confirm it.

Prompted for the reconfirmation for disk layout. If needed, we can edit it by selecting option 2 (will lead to a file edited by vi command.). In this case we are continuing with the default option.

Partition size has been reduced as shown here since the destination disk is with lesser capacity. Proceed with the selection of default option to start the recovery.

Disk layout has been created now, still it is editable. Check it and proceed with default option if everything looks good. 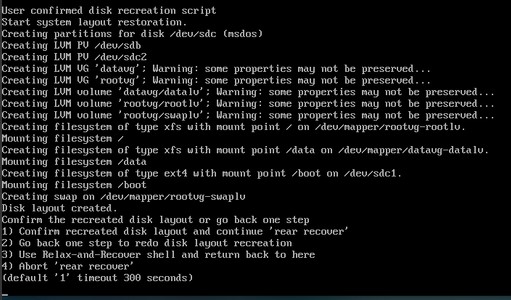 When we confirmed, the system started restoring the data from the backup file.

Recovery has been completed now. If you need to make any permanent changes to the system, we can edit the files and do it before reboot. The root file system is mounted under /mnt/local now.

As we found above, this system is having the source IP address by default. We need to change it by editing the file “/mnt/local/etc/sysconfig/network-scripts/ifcfg-en9”

Now reboot the system and check all the configurations after booting. Root password will be the one same as its source system.

System has been rebooted now with below details.

With this we conclude that the restoration is successful.