Host name is the unique identification name of each server. Host name can be given to the server either in ‘short name’ or ‘FQDN’. The configuration file which holds the host name is “/etc/hostname”.
To see the host name of a server, use the below commands.
[root@server01 ~]# hostname

The command “hostnamectl” is a useful one to work with pretty much all the host name related configuration. Below the options can be used with “hostnamectl” command. 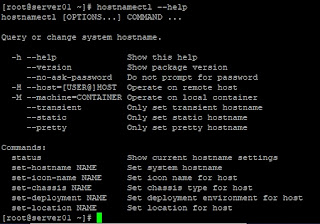 To set the hostname of a server there are different methods available. Below few of the most common methods described.

Another method to change the host name is to edit the configuration file manually. Below procedure shows how to do it.
The command hostname shows the current host name.
[root@server01 ~]# hostname

After editing this file, we need to issue the hostname command with new host name to set the new name to get the new name assigned to the system. The above command output still shows the old server name.

The command “hostname” can set the host name of the server which will reflect in the current environment and during the reboot of the server the actual name will be picked up from /etc/hostname file. However, to make the host name change globally a reboot is really required.

On RHEL7/ 8 and CentOS 7/8 use the “hostnamectl” command to deal with host name. This is the recommended method for all CentOS and RHEL 7&8 release servers.
Other Useful Links:

Lets talk about two scenarios here. 1.        Consider that you have a physical system which has an OS crash recently. If the system is so critical, you need to restore it as soon as possible to control the business impact. How do you do that? What we usually do is that, we will install a new OS, make necessary configuration in the system and application side and restore the data. This will take hell lot of time and our business cannot wait till that much time. What is an alternative option to it to reduce the downtime? 2.        You have a physical system and you need to migrate the OS to another system or create an exact replica of that system. How do you do that? Same solution as what we discussed above? Is it going to take too much time to get it done? What I suggest is, ReaR (Relax and Recover) . You can restore the exact configuration (replica) of a system from its previous backup.   Let’s see how it is going to work here. In this demonstration, We ar
Read more